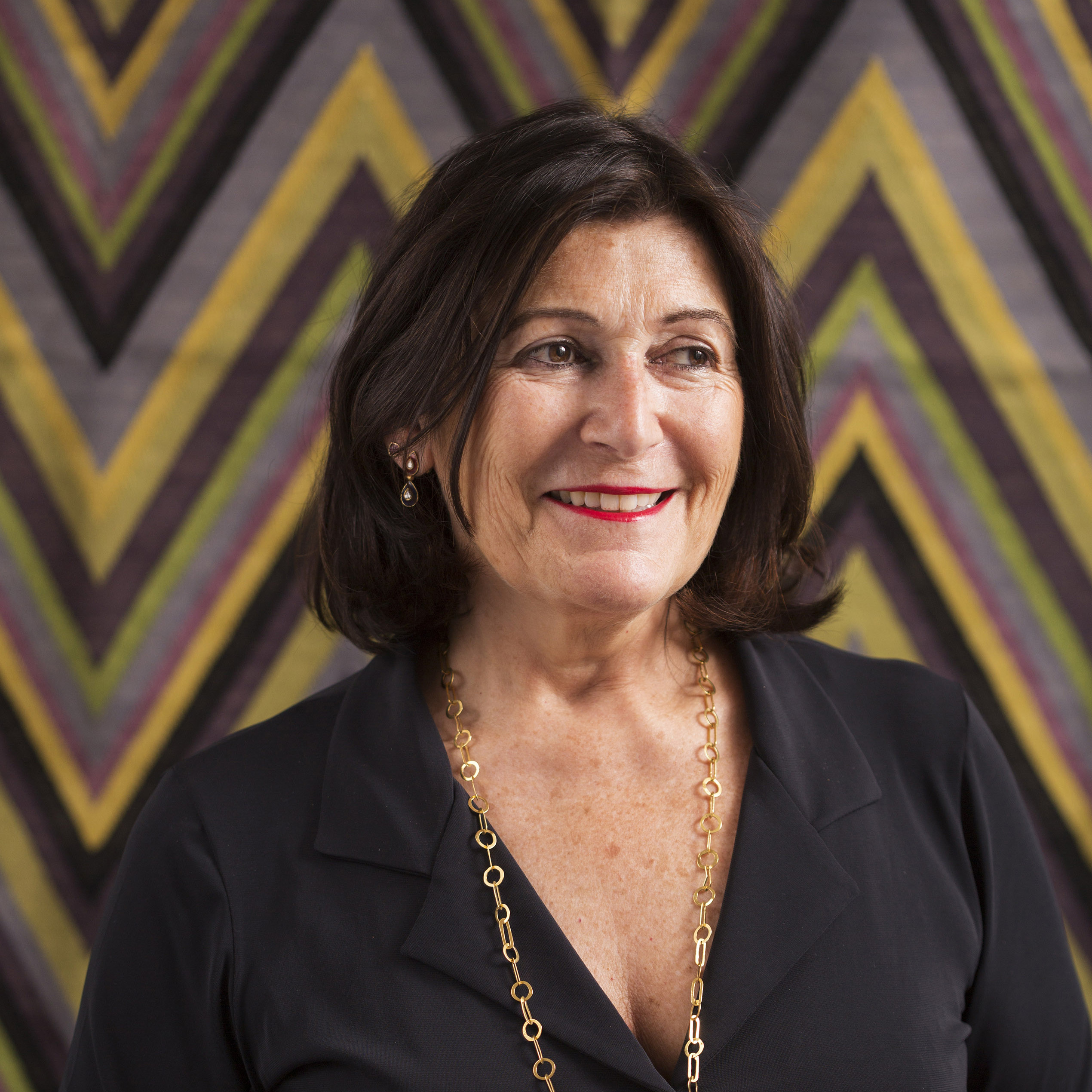 With a transatlantic career launched in the early 1970s, and clients ranging from Biba, Liberty and Yves Saint Laurent to Suzy Hoodless and Kit Kemp, Christine Van Der Hurd is one of Britain’s most important carpet and textile designers. A childhood spent travelling from market to market in Spain, France and Morocco with her antique dealer father, plus picking up tips from her mother who made her own couture gowns, Christine was immersed in design, before she burst onto the scene in the early 1970s and immediately started designing for some of the biggest names in fashion. Here she talks about colour, craftsmanship and 40 years in the frontline of design.

You began designing for big names straight out of college – what do you think grabbed them about your work?

People were doing a lot of conceptual work at college whereas my work was pure textile design. I made a beeline towards pattern, balance and most importantly colour. That world was dominated by designers such as Cacharel, Etro and YSL, and they wanted work that was delicate, precise and colourful – which is what I did.

What prompted your move to New York?

In January 1977 I made my first selling trip to New York, and I fell in love with the city. It was so different, so exciting. I met my husband [David Hurd], so I packed, got on a plane and never looked back. New York in the late 1970s-‘90s was filled with artists, designers and photographers, people like Mapplethorpe, Annie Leibovitz and Andy Warhol. And loft living! It was so different to London! Our loft was so big the kids could go rollerskating in it!

You launched the design atelier Modernage – was there an appetite for European furniture or did you take a chance?

Modern Age was very ahead of its time. We brought in Ron Arad, Danny Lane and Tom Dixon, and then branched out into European designer furniture, with companies such as Cappellini, Kartell and Moroso.

How was the vibe different?

Back then Broadway [where Modern Age was located] was the antiques area, and you’d see people like Quentin Crisp walking down the street or Mapplethorpe who was represented by the gallery above us. There was Studio 54, CBGBs, so much going on. Perhaps it could have felt crazy but I was immersed in the scene. Then in the early 1980s I got a commission for a carpet and that changed everything. By the early ‘90’s I had my own studio in New York with a team of employees and many big projects.

Did you design differently in New York?

Very much so, I became much more confident. Until then my designs were smaller, more insular, which worked well for people like Osborne & Little in London. But in New York everything was so much bolder – even the sheets! It really opened up how I designed.

Why did you return to the UK?

I always had a foot in London: my mother was there and our children were at school in the UK and I had a showroom in Design Centre, Chelsea Harbour. In 2002 my son Jasper [who tragically lost his life in a road accident in 2009] took over our showroom on Fifth Avenue.

Did Jasper change things for you?

Jasper did an amazing job, he was a natural. At that point we were doing everything by hand, painting designs with gouache. Jasper came in and said, “Mum, I could do that on a computer for you.” He’d always been interested in designing, as a little boy he’d sit over and watch me, and he was obsessed with applying colour to paper. When we realised Jasper could design using his computer, it changed everything.

Do any of his designs remain in the Vanderhurd oeuvre?

Absolutely. His designs include the iconic Flower Cut Out. His work was so memorable, so Vanderhurd. This year we launched a rug collection using a 100% wool construction developed by Jasper, called the Amelia Truss. His legacy certainly lives on.

Now my son-in-law, Jacob Van Horn, has now taken over in New York. We recently launched a collaborative rug collection and have another one coming out this September along with a fabulous new website. I’ve been working for 40 years, and now there’s an entirely new way of sourcing. The Internet has brought so many possibilities for getting our designs into the world.

So have computers changed things?

Yes, absolutely. But what excites me right now is carpet constructions, whether its building up fabric with embroidery or different weaving techniques to create varying heights and depths. Carpets are more than just pattern, it is the magic of weaving and the textures created in the process. This cannot be achieved digitally!

What we do is ancient, and simply cannot be replaced by machinery. In India and Nepal the weaving industry has changed hugely. It’s difficult to find manufacturers and weavers who can craft carpets of the very best quality, and we’re determined to preserve this art of weaving. Carpets are mainly crafted by men in India, as is the more intricate hand embroidery on our fabrics. We have also been training women to take over certain embroidery stitches, giving them a career and an income. In the last 25 years we’ve trained hundreds of people. British craftsmanship is important, but it’s also important to support other nations.

How does it feel being in V&A and other museums?

Well it’s very exciting, but what really pleases me is that people want my work in their house or hotel. I was quite insecure as a young designer, and I’m still proud that people love my work and come back for more!

Do you think modern interior design is frightened of colour and pattern?

Years ago people’s houses were filled with tapestries and patterns, but now people tend to favour minimalist interiors, it’s all about that perfect cushion on a beige sofa. Some people come to me with very subdued palettes, and I will accommodate that, but truthfully my excitement comes when playing with colour, pattern and texture. We have a hand-knotted, saffron-yellow carpet in our library and every morning it makes me smile. That’s what you want in a room: to walk in and for it to make you happy.

How would you advise someone who is keen to use colour but is scared of ‘doing it wrong’?

Do a detail, for example a carpet edge-bound in colour, or one unexpected chair in great upholstery. The obvious things are cushions but try something a bit different, like a patterned ottoman with a neutral sofa. We design ottomans using our silk dhurrie fabric – they look amazing, they last a lifetime and silk takes dye beautifully.

You’ve been working with Kit Kemp – do you have more collaborations afoot?

I’ve been working with Suzy Hoodless on the original Television Centre in London. The design work has been inspired by the building’s history so the carpets are unique. I love high-end residential projects too: it’s an opportunity to do something truly individual.

Discovery. New things. Travelling and finding new markets, shops, new flora and fauna, new art. Inspiration is everywhere: it is simply what you pick up from the world. I always want to see more! I think that’s part of being an artist, always looking for more ways of filling that hole, more excitement, colour, more designs.