Piet Oudolf: Into the Wild

Piet Oudolf is considered by many to be one of the best and most innovative gardeners and plantsmen of the modern era. In the 1990s he spear-headed the ‘natural’ movement, pushing planting away from formal flowerbeds to a more seasonal, flowing approach that emphasised form over colour and plants that remain interesting throughout the year. His highly structured yet totally natural-looking style is constantly evolving and recent achievements include The High Line in New York, the Lurie Garden in Chicago, a section of RHS Wisley, the 2010 Venice Biennale and the gardens at Hauser & Wirth Somerset. He has co-authored several seminal gardening books and recently published Oudolf Hummelo, a look at Oudolf’s own garden in the Netherlands.

You started life in restaurants. How come you had such a big career change?

It was a family restaurant and I helped run it in my 20s but it was not the life I wanted. I was looking for other jobs that I would like and I came into the plant world. Passion for plants rather than design was my motivation. I started my own business designing and making gardens, but plants were the tools I used to express myself.

You were once seen as an English gardener – now you tend to stay away from the classic flower garden. What changed?

It’s more that I was influenced by the English garden. I travelled extensively in the UK and made friends with botanists, plantsmen, nurseries. I started a nursery in Hummelo where we had rare plants and people became very aware of what I was doing. It became all about plants, and design was pushed to the back seat until the early 90s. Then my vision developed from a more traditional garden to a wilder one. It came from a group of us in the Netherlands who were not happy with a decorative garden that only celebrated one aspect of a plant rather than the seasons. We wanted something more spontaneous. We became interested in working with very different, non-traditional plants, searching for new way of looking at planting and design, particularly in a public space and in cities. In 1996 I gained a commission for a park in Stockholm which gained attention, and at about the same time I published Dream Plants in the Natural Garden. People liked our idea that it’s not just about flowers but also about succession, seasonality and decay.

Oudolf was searching for a new way to celebrate seasonality in planting, particularly in public spaces. Pictured: the Lurie Garden in Chicago

What would you say is your gardening philosophy?

The beauty of the wilder landscape and how you bring it to people, showing what you can do with plants, how you can communicate your feelings to the world using plants as the medium.

What makes a perfect garden?

The perfect client with the perfect designer, and choosing the right plants! You can never make a perfect planting but you can make very good ones. Using grass in my schemes came through intuition not on purpose. If you look at something like a wild meadow, grasses are predominant – there is hardly any place in the wild that has no grass texture. It’s long lasting, looks good even in winter, it looks good mixed with perennials. Some perennials disappear after flowering, others leave enough skeletons to survive the season as it goes into winter, and enough body to survive the changes. Then you take it back in spring.

Grass is the dominant species in the wild and looks good even in dormant seasons. Pictured: the Lurie Garden in Chicago

Are depth and texture more important than colour?

Form comes first, then colour creates another layer on top to create mood and sensibility. If you have only colour, then nothing is left.

Your own garden is for experimenting – what are you working towards at the moment?

I’ve trialled and experimented with it for over 30 years. It means I can make mistakes before going to other people’s gardens. Knowing what works is a big advantage! I haven’t changed it much recently, just refreshing it where we had a mouse plague.

How did you get involved with the Hauser & Wirth Somerset gallery?

In 2010 I was asked to do the garden at the Venice Biennale where I was interviewed by Hans Obrist. I was then invited to do the 2011 Serpentine Pavilion [with Peter Zumthor]. This was an interesting garden because it functioned more as an exhibition. You have to start with plants that are bigger and you need more per square metre, and different to ones that grow over time. It’s one thing for plants to be good for one week but from June-November was very complicated. Hauser & Wirth led from that.

What was the plan behind Hauser & Wirth?

The idea was that people entering the gallery would come upon the garden and be surprised by it. So it wasn’t placed at the entrance, which is very calm, sober and plain, almost like a farmyard. So the garden out the back comes as a big surprise. It’s quite a complex planting featuring hundreds of varieties of plants in various combinations that flower in different seasons but in a coherent, repetitive pattern. The garden works in a circulation system and people walk through the middle.

I’ve read you find it hard to leave particularly good projects behind. How to you feel about the garden at H&W?

It really was one of the best projects, not because I had more freedom but because of the care they took. It’s different to what has been done before, it has its own identity.

The High Line is exquisite thanks to your planting. Do you see that as your masterwork? Was it a particularly complex job?

It’s hard to say. You don’t want to say that one project is better than another! It’s definitely my most iconic work, but the complexity is different to most of my projects: 2.5km of planting with different ambiences and surprises, very satisfying. The spaces are open with lots of buildings, many under construction. The architects created a rough script / narrative: A meadow, trees, more wild, more cultivated, more dense then more open – they had a strong idea about the space.

The High Line follows a planting ‘script’ along its 2.5km length

What are you working on at the moment?

A museum in the Netherlands, the Maggie’s Centre at the Royal Marsden Hospital in London, the planting of a rooftop garden for Goldman Sachs with Gross.Max, another big rooftop garden in Amsterdam – it’s 3,000m2 on two levels. And I have another rooftop garden in Wiesbaden, Germany. People are really discovering the possibilities of roof gardens but there’s more to consider: you need to communicate with the architect about carrying the weight of soil and what depth I can have, then I know what I can do.

Oudolf’s gardens may look wild but they are meticulously planned. Pictured: Ichtushof

Are there any particular elements of design you enjoy the most?

I love a good woodland planting which uses another community of plants to the ones in open fields – trees create stressful circumstances. Plants in meadows are more dynamic, which is why that kind of planting does well in full sun. But anything dynamic has a temporary nature which is the most difficult part of landscaping and is why trees are important. I also love a planting dominated by grasses – but more than that I get excited by a client who gives me a good brief and a good space, then my imagination takes over. I’m never satisfied, but that’s a good feeling – I can live with it.

Right here at home. I also love Scandinavian countries for their climate and experience and I am excited by the big spaces of the USA like the Texas wild flowers. It’s amazing what you see when its not part of your own climate, it’s inspiring. 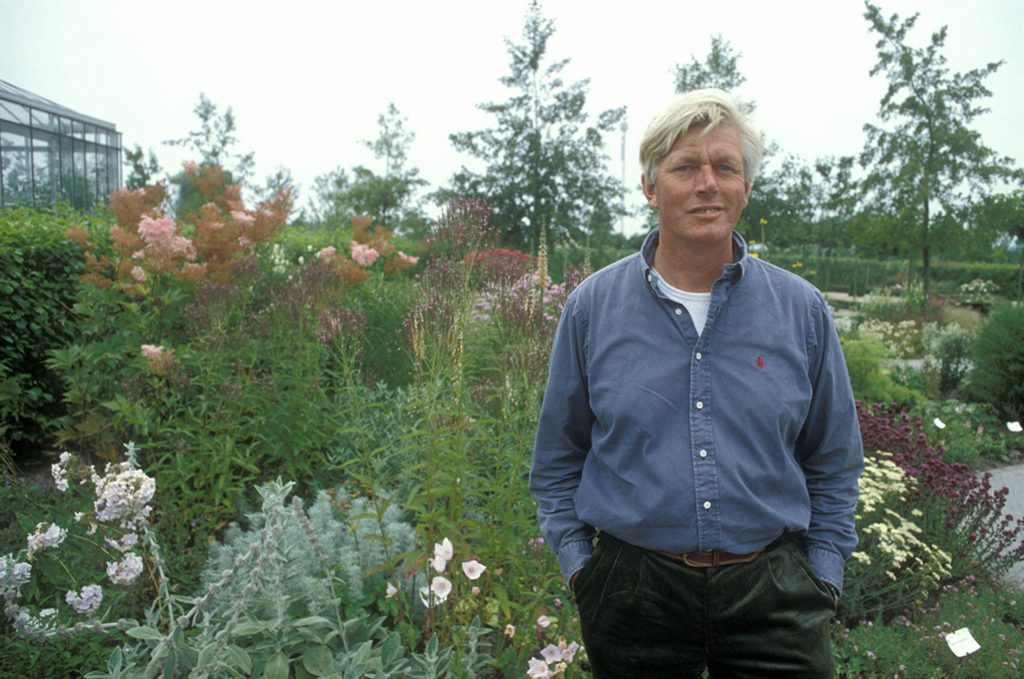 What designers or gardeners do you admire?

In my early career I was very influenced by Karl Foerster’s books and philosophy. I like Rick Darke for his knowledge of plants and understanding of modern landscapes and James Corner Field Operations for their approach to the High Line. People who move me create gardens on the edge of control. There’s still a lot to find out, where can we go.