It could be Paris or London or Prague or anywhere, but you know what to expect from a Buddha Bar. A sexy, slinky vibe, seductive décor which fuses European sang froid with Eastern decadence, a certain aura which suggests that everyone inside is cool and beautiful purely by proximity, all emphasised by the sultry, ambient music which whose fame has almost outstripped the original brand. There’s even a Buddha Bar Hotel (in Prague), for those who get so overcome by the whole experience they just can’t help themselves.

The London version, which opened in 2012 (for the second time), is sited fabulously in central Knightsbridge. Or at least it should be fabulous, if it weren’t for the fact the building was being renovated when I visited, and the huge picture windows were obscured and overhung by grotty scaffolding. Rather than a gorgeous gold Buddha, the venue beneath was advertised by a plastic banner hanging limply from the grey tubes. The equally upmarket Mr Chows and Mari Vanna (a favourite with Russian oligarchs), have suffered the same fate.

Once inside, however, it’s business as usual. The huge space, once home to pork-for-the-princes Chicago Rib Shack, lends itself to the opulent Buddha Bar style. It’s a far better location for this sultry venue than Buddha Bar’s first attempt, in a difficult space under Victoria Embankment.

We ordered a mix of sushi and sashimi with a few little treats – rainbow maki roll (inside out king crab topped with seven kids of fish), some rock shrimp tempura. The waiter suggested two signature starters: tuna tartare and chicken salad.

Hang on – chicken salad? Is there anything more dispiriting? The world’s most badly treated and anaemic meat, coupled with frequently limp, depressed green leaves, bearing a faint taint of having left their roots all too long ago. Oh, how wrong I was. It was simply superb and compulsively moreish, a fabulous play on textures – soft, marinated chicken, red and white cabbage offering bite and then added crunch from wonton skins, rolled in a spicy-sweet sesame sauce. They need to call it something more inspiring, perhaps, ‘eat this NOW’. 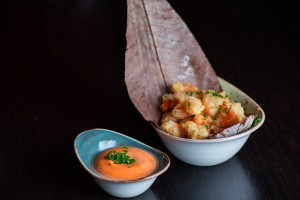 In fact, the food was a pleasurable surprise all round. You expect a certain standard from this Parisian flag-bearer, but despite food not being its primary focus it was all genuinely excellent. The sashimi was sliced with quiet skill and well-chosen. The rock shrimp was fresh as hell, and just as importantly, so was its coating of tempura batter. I loved it all, and now I clearly need to go back to sample their more famous cocktails.

The prices are a little wince-making (though no worse than any other upmarket Japanese restaurant, and this is Knightsbridge) but they do a more reasonable lunchtime bento box from £19.50, and they don’t skimp on the amounts. It is of course the perfect place for a date – and you never know, you might end up in Prague.

This review appeared on The London Word